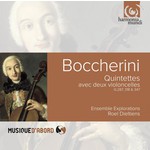 "As for well executed, you will not find better, and the Harmonia Mundi recording is perfection."
(William Dart NZ Herald)

"Pity Luigi Boccherini, known to many by that minuet used as a musical decoy in the 1955 film The Ladykillers and picked up again by the Coen Brothers in their 2004 remake of the comedy. Boccherini, who lived from 1743 to 1805, was more or less a contemporary of Haydn - he was scathingly described as "Haydn's wife" in some quarters - but hailed in the 1780s as the Austrian's equal by no less a critic than the good Dr Charles Burney. Like fellow Italian Domenico Scarlatti, Boccherini spent much of his life in Spain and perhaps the musical ingenuity that caught Burney's ear was the result of this Hispanic environment. Unlike Haydn, Boccherini was a performing composer. A brilliant cellist, he penned more than 100 quintets for string quartet with an extra cello part, which he would have played.

The importance of Boccherini as a hands-on composer inspired musicologist Elisabeth Le Guin to discuss the aspect of physicality in his music in the somewhat misleadingly titled Fleshly Pursuits Boccherini's Body: An Essay in Carnal Musicology. In short, Boccherini is no assembly-line 18th-century kapellmeister. Roel Dieltiens' Ensemble Explorations is a concept rather than a group, colleagues who occasionally gather around the Dutch cellist to investigate a wide range of repertoire, both live and on CD. Choosing just three Boccherini quintets for this Harmonia Mundi recording must have been tricky and those selected will make you hanker to taste the other hundred. The two works in minor keys are sensuously expressive, whether you are luxuriating in the rich harmonies of a G minor Preludio or being blown away by the breezy canter of a D minor finale. An F major Andante is a roving harmonic adventure with a finale suggesting the spirit of Vivaldi in furious fandango. "There is perhaps no instrumental music more ingenious, elegant and pleasing than these quintets," was Burney's comment in 1789. "Invention, grace, modulation and good taste conspire to render them, when well executed, a treat for the most refined hearers and critical judges of musical composition." As for well executed, you will not find better, and the Harmonia Mundi recording is perfection."
(William Dart NZ Herald)

In their general layout and their style, the three quintets recorded here illustrate Boccherini's formal variety and freedom: whether first violin and first cello are deliberately highlighted, or the roles are distributed in more balanced fashion, this composer had an unrivalled ability to use the group of instruments to create a limpid, shimmering soundscape, traversed by fleeting zones of shadow and sudden bursts of light.