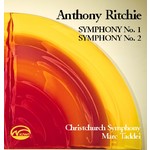 Anthony Ritchie completed a Ph.D. on the music of Bartok in 1987, studying at the Bartok Archives in Budapest. He also studied composition with Attila Bozay at the Liszt Academy, and completed his Mus.B (Honours) at The University of Canterbury.

The title of this symphony comes from the ominous tam tam stroke that opens the first movement, a mysterious echo heard by two characters from E M Forster's famous novel, 'A Passage to India', when they enter the Marabar Caves.

Symphony No.1 'Boum' was completed while Ritchie was Composer-in-residence with the Dunedin Sinfonia in 1993, and first performed the following year, under the baton of Sir William Southgate. It has received numerous performances, and in 1998 was recorded for Concert FM by the New Zealand Symphony Orchestra.

This symphony was commissioned by The International Festival of the Arts It explores the millennium theme from an historic and poetic angle and takes as a starting point famous lines from 'The Second Coming' by William Butler Yeats:

"Turning and turning in the widening gyre
The falcon cannot hear the falconer;
Things fall apart; the centre cannot hold;
Mere anarchy is loosed on the world . . ."

Written in 1921, when the old order in Europe was breaking down, it suggests a revolution or rotation in history (the gyre) will bring about a 'second coming' of an important historical figure, and the dawn of a new Millennium. Yeats' vision of the new world order to come is not, however, optimistic. He sees the coming of a 'rough beast' with a 'lion body and the head of a man', a cold and heartless creature that might be equated with certain infamous and autocratic leaders in the 20th century.

The 'gyre' or revolution is represented in the symphony by a rolling, sliding timpani sound, accompanied by bass drum and tam tam at the start of the work. This idea becomes an important motif and appears at the very start. Following the 'gyre', we hear a 'life and death' theme that begins like a cradle song (the birth of Christ), rises, and then twists downwards in a chromatic line. This theme provides most of the material for what follows.

Anthony Ritchie - biography
Anthony Ritchie completed a Ph.D. on the music of Bartok in 1987, studying at the Bartok Archives in Budapest. He also studied composition with Attila Bozay at the Liszt Academy, and completed his Mus.B (Honours) at The University of Canterbury. During this time his Concertino for Piano and Strings was recorded onto LP by Kiwi Pacific. In 1987 he was Composer-in-Schools in Christchurch, before moving to Dunedin as Mozart Fellow (1988-9) at Otago University. Anthony was Composer-in-Residence with the Dunedin Sinfonia in 1993-94, completing his Symphony No. 1 "Boum". He freelanced from 1995-2002, writing commissioned works for performers as diverse as the NZSO, Class Act Opera, and Footnote Dance Company. In 2000 his Symphony No.2 was premiered by The Auckland Philharmonia at the International Festival of the Arts, and was followed up by the comic opera Quartet at the 2004 Festival. Anthony has composed film music in collaboration with Natural History NZ, including Southern Journeys (2000) and Timeless Land (2003). In 2004 his opera, The God Boy, was a critically acclaimed success at the Otago Arts Festival, and in 2005 his 24 Piano Preludes were released on CD by Atoll, also to good reviews. In 2006 a CD of Ritchie's chamber music was released by Kiwi Pacific Records. Anthony is now a senior lecturer in composition at Otago University. His works are regularly performed in New Zealand, and increasingly overseas as well, most notably the Flute Concerto.