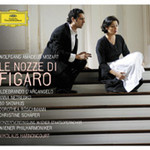 'This Marriage of Figaro should go down in history as departing director Peter Ruzicka's greatest Salzburg achievement...four hours of perfection.'

Anna Netrebko - 'the Russian-Austrian darling of the Salzburg Festival' Tagesspiegel - has once again triumphed at these festivities. With her 'unstinting and sensuous vocalism' (Frankfurter Allgemeine Zeitung), Anna delivered a winning portrayal of Susanna in Claus Guth's new production of Le nozze di Figaro , which reopened the newly renovated Kleines Festspielhaus (now the House for Mozart) on July 26, 2006.

Anna Netrebko was part of a cast that 'ensured musical splendour and radiance' (Zeit online) led by Nikolaus Harnoncourt with the Wiener Philharmoniker. Critical acclaim for Anna's performance was rhapsodic: 'The Russian pearl with the servant's apron is part of the whole, flying along as if weightless, as light as a wisp of smoke, wholly individual,' reported Die Welt. 'As a character she is pure delight, her vocal style simply bowls you over.'

'Guth and Harnoncourt have opened up a new perspective on an opera that is normally staged as a lightweight, turbulent farce', wrote the Zeit online, while Die Welt described Harnoncourt as 'a sorcerer able to conjure up magical sounds.' Bloomberg echoed the positive accolades: 'This Marriage of Figaro should go down in history as departing director Peter Ruzicka's greatest Salzburg achievement . . . four hours of perfection.'

To tie in with the Salzburg Festival 2007, the Figaro DVD - already released as part of the Mozart 22 box-set in 2006 - will be released individually in June. It also includes an extensive documentary offering great insights into the making of this historic production.

Voice of the Violin