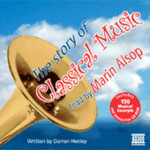 This lively recording is a perfect way to introduce classical music to the entire family. It looks at the music through the lives of the great composers and their environment, from the churches and cathedrals that produced the familiar sound of Gregorian chant, to Johann Sebastian Bach, the family man composing for the glory of God, and Wolfgang Amadeus Mozart, the child prodigy, genius and prankster who wrote some of the finest music ever yet was buried in a pauper's grave.

"The Story of Classical Music is the sort of project that hardly ever gets reviewed and at which people are likely to turn up their noses. More's the pity, for it is a model of how to introduce children to classical music. With a script of humour and grace by Darren Henley - which neatly sets the musical examples in their historical context - and links read clearly (and un-patronisingly) by conductor Marin Alsop, the Story of Classical Music arrives complete with an interactive CD-ROM for a give-away price." -- Julian Lloyd Webber, Daily Telegraph

"This audio production sounds so incredibly hoity but, believe me, it's a treasure. Starting with the earliest known musical forms, the narration explains what characterizes each period of music and details the lives of prominent composers alongside excerpts of some of their pieces. Best of all, each new step in musical development is placed in historical context. Sounds dry but it isn't." (Examiner)