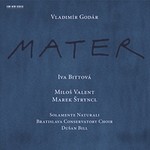 "This is easily one of the highlights of the classical year, and I urge you to acquire this disc."
(AudAud.com Five Stars)

"Godár was born in Bratislava in 1956, and was drawn to the renaissance masters despite his admiration for the avantgarde and its ilk. Berio, Ligeti, Xenakis, and Lutoslawski, despite imparting many worthy lessons, ultimately gave way to Machaut, Dufay, and Ockeghem. The celebrated soprano Ivo Bittová has worked with the composer on many projects, and leads the ensemble here in a fervent, completely natural reading that seems second nature. All the forces involved play as if it were the only music left in the world, and the typical ECM sound allows for great absorption and resonance. This is easily one of the highlights of the classical year, and I urge you to acquire this disc."
(AudAud.com Five Stars)

Vladimír Godár's hour-long cantata "Mater" is comprised of six originally independent compositions, with "Maykomashmalon" framing the whole work. The individual pieces are set for ensembles of different sizes - from a trio for voice, viola and cello to full string orchestra with choir. The use of period string instruments, including chitarrone and harpsichord, all tuned in low pitch result in a remarkably homogenous sound throughout the work.

The individual pieces, composed between 1997 and 2005, are all linked to the overall subject of the circle of human life: Latin and Slovak texts, Yiddish and Christian sources, sacred and profane music unite under the principle of "woman" and "mother": protecting, consoling, mourning but also as an object of praise and adoration: "Virgin Mary is the benefactor to the Polish and Slovak peoples", says Vladimír Godár, "and the idea of mother in the Slavic world is generally identified with the motherland. The concept of a mother burying her own child is one of the most shocking images of our imagination because it questions the very fundament and existence of life."

"Ecce Puer", based on a poem by James Joyce, was premiered in 1997 under the direction of Andrew Parrott. The soloists were singer Emily van Evera and baroque violinst John Holloway who, in the same year, recorded Godár's arrangement of the "Ciaconna" by Antonio Bertali for the ECM-album "Unarum Fidium". "Stálá Mater", the Stabat Mater sung in Slovak language, was inspired directly by Iva Bittová's art. Says Godár: "Of all religious texts Stabat Mater had always attracted me the most, but when I started listening to Arvo Pärt's setting it seemed so perfect that I couldn't see a way for my version not being redundant. Only when I got to know Iva, her musical intuition, energy and discipline, did I feel able to write a Stabat Mater for her. Her singing is pure and full of emotion and her articulation is just perfect."

Subsequently Bittová and Godár worked together on several projects, among them Bittová's record of Leoš Janáček's "Moravian folk poetry in songs" in an arrangement of Godár's for soprano and string quartet. Furthermore the composer supported the singer in preparing her collaboration with the Bang on a Can All-Stars on the album "Elida". Eventually, in 2003 at the Bratislava Music Festival, the musicians on the present recording gave a concert with the motto "Lamentations, meditations, jubilations" which included the then new compositions "Magnificat" and "Regina Coeli".

Vladimír Godár, born in Bratislava in 1956, trained in serial composition before discovering early music for himself. "In the seventies there were quite a few groups around who started exploring historically informed performance practice. I used to play continuo a lot in those days, first at the piano, later on harpsichord. These were most important moments of my musical formation and from these circles developed the first major Slovak baroque ensemble, 'Musica aeterna' in which violinist Miloš Valent started his career. This work on early music changed my concept of contemporary composition completely. I realised that the principles of creativity are relative and that different attitudes produce very different results."

Regardless of his admiration for modern composers including Ligeti, Lutoslawski, Berio, Xenakis or Górecki, Godár's interest in renaissance polyphony intensified during his study visit at the Vienna Musikhochschule. "The contact with my professor there, Roman Haubenstock-Ramati, didn't exceed ten minutes but I spent whole weeks in the library studying De Vitry, Machaut, Dufay, Ockeghem and many others." During this period Godár was also particularly impressed by Thomas Mann's novel "Doctor Faustus" and particularly by the dialogue between Leverkühn and the Devil.

"Every sound bears the whole within it, and the whole of history, too", reads one of the Devil's central statements on music which Godár interprets in a very personal way. Under Thomas Mann's influence he lost faith in the concept of artistic progress and began working on his own kind of 'musical archaeology'. "Art, just like Antaios staying in touch with Mother Earth, builds on existing texts. It is the exegesis of the text and a new work of art is its palimpsest." It is thus fully intentional that "Mater" incorporates elements of pre-existent texts, both verbal and musical ones: the interludes between the Slovak lullabies allude to renaissance compositions for viola da gamba-consorts, "Magnificat" is based on the traditional intonation as used in Monteverdi's "Vespers of the blessed virgin". "Regina Coeli" adapts the style of music-making in the early days of the Slovak Baroque movement. And the overall layout of "Mater" is inspired by a short story by Czech writer Bohumil Hrabal.

Vladimír Godár is one of his country's foremost musicologists and was editor of the Slovak music journal "Slovenska Hudba" for many years. His works were awarded with numerous national prizes and he was composer in residence with the Slovak Philharmonic Orchestra in 1993/94. Godár is a prolific and well-established film composer.

Iva Bittová, who has collaborated with musicians such as Fred Frith and Tom Cora, is one of the most remarkable vocalists of our time, particularly known for her energetic simultaneous singing and violin-playing in concerts and on record. Born in 1958 in Northern Moravia (Czech Republic) into a musical family, she grew up with the regional folklore mingled with influences of gypsy and non-European folk music. Her father, a gypsy fiddler, relocated the family often. After early violin lessons she studied singing, ballet and drama and was a successful actress for stage and film before starting her international career as a singer and violinist. Bittová is equally at home in the field of classical music - she regularly appears in Mozart operas and has recorded a selection of songs by Janáček - as in avant-garde and folk. She is also a prolific composer who has created what she calls her "own personal folklore".

Miloš Valent comes from a family of Slovak folk musicians and was simultaneously trained as a classical violinist and a traditional musician. After graduating from the Bratislava conservatory he was a member and leader of several orchestras and became concertmaster of Stephen Stubbs' orchestra Teatro Lirico in 1997. He teaches baroque violin and chamber music in Geneva, Malmö and Bremen. On ECM New Series Valent can be heard on the Stephen Stubbs record Teatro Lirico, released earlier this year. He recently joined John Potter's Dowland Project (a new CD is in preparation). It was Miloš Valent who, during a recording session, made Manfred Eicher aware of Vladimír Godár's "Mater".

Solamente naturali was founded in Bratislava in 1995 by Miloš Valent as a flexible ensemble of up to 25 musicians concentrating on lesser known works of the baroque repertoire. The orchestra has a regular concert series in Bratislava and has toured Austria, the Czech Republic and Finland.

Marek Štryncl was born in Northern Moravia in 1974 and studied cello and conducting in Teplice, founding his own baroque orchestra, Musica Florea, in 1992. As a cellist he has played in numerous European baroque ensembles. Artists such as Magdalena Kožena have recorded works of Bach, Zelenka and others under his baton.

CD-package includes 28-page illustrated booklet with a composer's note in English. "Mater" was released for the Czech and Slovak markets by Pavian Records, Bratislava, in spring 2006.