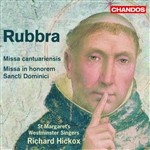 "The singing of the St Margaret's Singers is smooth, spiritual and intellectually engaged. The two brief carols are atmospherically done. Of the two masses the Missa in Honorem Sancti Dominici (a cappella) is the most constantly rewarding, right from its swaying Kyrie to its gothic-dark Agnus Dei. In this work one cannot help but wonder if Rubbra had been influenced by that least religious but most mystical of composers, Arnold Bax in his masterpiece, the motet Mater Ora Filium. Beside the op. 66 work the op. 59 seems almost 'penny plain' despite the presence of the organ."
(MusicWeb Nov 2007)

Richard Hickox writes, 'This recording has so many special memories for me. Not only was the choir of St Margaret's Westminster in a particularly golden era, but I adored the music, and, above all, I knew what it meant to the composer himself. I had met Edmund Rubbra at the age of seven at a Guy Fawkes party. I remember him celebrating the fact that he had just completed a symphony that very day. Little did I think that three or four decades down the track I would have recorded his entire symphonic output for Chandos. The masses, and particularly the two carols, are perhaps the most personal music in Rubbra's output. After I had not seen him for many years, he came to the recording sessions. As the last carol at the last session was completed, I went down to the recording room to find Edmund in the corner with tears running down his cheeks. The most humble of men, he said he was just so grateful that we had done the project at all, and I like to think too that he'd been moved by the performances we gave.'

As Rubbra states in his notes, Missa Cantuariensis, the first and largest of his five settings of the Canon of the Mass, was primarily designed for use on festival occasions. On receiving a commission by Canterbury Cathedral during the 1939 - 45 war, he was specifically asked to set the words of the English rites of 1662 and 1928. The Mass was commissioned whilst he was still serving in the army and written whilst on active duty. This is an a cappella work, but in the Credo features an important organ accompaniment, which Rubbra felt underlined the difference between a solitary personal statement of belief and the act of corporate worship and appeal. Written in 1948, Missa in honorem Sancti Dominici was designed for normal liturgical use. Rubbra therefore set the six movements as succinctly as possible, and in this respect the work differs greatly from the much more expansive Missa Cantuariensis.

In his notes to this CD Timothy Storey acknowledges how heartened he has been to see the recording restored to circulation as he considers it to be 'definitive and utterly compelling made under the composer's supervision'. He also comments that 'These performances come up as fresh and convincing as ever, and should inspire a new generation of singers and conductors to get to know this music'.