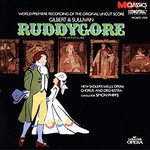 The New Sadler's Wells Opera was formed in the mid-eighties, filling the void (or so it was thought) that was left by the closure of the original D'Oyly Carte. It has even been suggested that the Powers that Be pushed the old Company gently into the grave, so that they could make way for a new, and presumably more-enlightened, light opera company. The New Sadler's Wells, however, enjoyed only a brief time in the sun, and the Company folded after a couple of years.

In its brief history, the NSWO managed to put on two extremely important G&S productions that set a new standard for textual fidelity. The first of these was a centenary production of Ruddygore that restored the opera nearly to a first night state, restored some "lost" ghost music that is found only in Sullivan's autograph score, and removed layers upon layers of embellishments to the text that were heaped on by D'Oyly Carte musical directors of the 1920s. Those who think they know Ruddigore will be both surprised and delighted to meet the work as Gilbert & Sullivan actually wrote it. This is a landmark recording that no serious fan will want to be without. (Marc Shepherd)