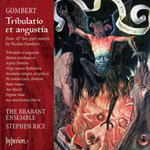 GRAMOPHONE MAGAZINE AWARD FINALIST 2008 - Early Music - "It's one of very few discs of this repertoire I've been happy to play in its entirety, and then several times since. This is in part a tribute to Gombert … but also to the Brabant Ensemble and Stephen Rice" GRAMOPHONE EDITOR'S CHOICE

'It's one of very few discs of this repertoire I've been happy to play in its entirety, and then several times since. This is in part a tribute to Gombert … but also to the Brabant Ensemble and Stephen Rice … By encouraging an unusually individual and carefully balanced vocal response, he avoids the pitfalls of relentless consistency and arrided elision … There is a welcome and (in this music) novel belief in the power of voices as voices … Try the sopranos halfway through Hortus conclusus est for erotic Mariolatry at its most disconcertingly sensual. Arise, make haste, as they sing, and hear this music' (Gramophone)

'The Brabant Ensemble's exploration of the "forgotten generation" of composers between Josquin and Palestrina is reviving an abundance of unwarrantedly neglected sacred polyphony. Judging by this splendid selection of motets, Gombert's neglect is particularly flagrant. In penitential pieces, such as Aspice Domine and Tribulatio et angustia, his lavish use of dissonance within a smooth-flowing yet intricately imitative style creates an atmosphere of almost unbearably intense and bitter anguish, whether contemplating a city laid waste or beseeching rescue from a foetid quagmire … These shapely and well-paced performances do full justice to Gombert's outstanding talent' (The Daily Telegraph)

'This is impressively accomplished ensemble singing … Rice's own booklet notes provide fascinating insights into the music … It is this intelligent approach to the spirit of the text (there is a glorious moment in Hortus consclusus es when the soprano soars ethereally to the line 'arise, make haste my beloved'), coupled with outstanding tuning and balancing, which makes this such a distinguished group. The Brabant Ensemble are quickly establishing themselves as one of the more impressive English groups specializing in Renaissance msuci, and this, their fourth CD release, only increases their stature' (International Record Review)

This is The Brabant Ensemble's third disc for Hyperion. Under their director, eminent musicologist Dr Stephen Rice, they continue to excavate jewels of the sixteenth-century choral repertoire which have until now remained underperformed and under-represented in music history. Their natural and instinctive performing style, which foregrounds the essential vocal qualities of this music, unlike the instrumental tone of other early music choirs, brings these beautiful and complex works abundantly to life.

Gombert's motets are the heart of his writing and this selection of them allows the range of his musical accomplishments to fully emerge. Often seen as written in penance for heinous crimes committed by the composer, many of them are settings of various texts of penitence, sorrow and yearning for deliverance from punishment. Images such as the 'hellish lake' in Tribulatio et angustia are dramatically explored. Also on this disc are motets for the adulation of the Blessed Virgin Mary, which surprisingly demonstrate an especially intensified and dissonant musical style, showing the almost erotic level of devotion suggested in some of the greatest art of this period.