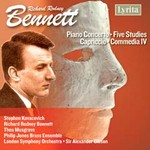 Few composers nowadays manage to avoid being 'pigeon-holed'; Sir Richard Rodney Bennett (b. 1936), however, is a rare and fine exception. As well as writing for the opera theatre and the concert hall, he also composes film music, and, a versatile pianist, plays jazz and performs songs from the shows in cabaret. Above all else, he is a composer with an overwhelming desire to communicate.

Bennett was born in 1936 at Broadstairs in Kent. Coming from a musical family - his mother studied with Holst - he started composing when he was young and won a scholarship to the Royal Academy of Music in 1953, where he studied with Lennox Berkeley and Howard Ferguson. Earlier informal training from Elizabeth Lutyens, however, had instilled in him a curiosity for the avant garde, and so thanks to a scholarship from the French Government, he went to study with Boulez for two years, as well as enjoying visits to Darmstadt.

Having assimilated Boulez's musical language (he was, incidentally, the percussionist in several early performances of Le Marteau sans Maitre), Bennett then developed what has been termed a 'neo-Romantic serialism', which, perhaps like that of Berg, was ideally suited to opera. Indeed, Bennett composed no fewer than three full-length operas in the 1960s: The Mines of Sulphur (now deservedly back in the repertoire after a stunning revival at Glimmerglass); Penny for a Song; and Victory. There is also the hugely popular, much performed children's opera All the King's Men.

In the '60s and '70s Bennett also composed works in a wide range of other genres: there are the large-scale works for choir and orchestra Epithalamion and Spells, as well as three symphonies and concertos and/or concertante pieces for almost every instrument. There are also many a cappella choral works, song-cycles and instrumental solos. Many of his smaller works of the 1970s fall into series, including the sequence of pieces called Scena for solo instruments, and the group of ensemble works called Commedia.

Since his student days Bennett has always composed (with considerable success!) for film. More recently he has composed concert works in a jazz idiom, with 'crossover' elements, and with an unashamedly tonal language. But serialism still influences the way he composes, even providing the foundation for his spectacular score for the BBC's Gormenghast (1999). He also regularly performs in cabaret, often with Claire Martin, to whom he refers as a 'major talent'.

Sir Richard Rodney Bennett lives in New York City and is published by Chester-Novello. UE has works dating up to the early 1970s.
(universaledition.com)