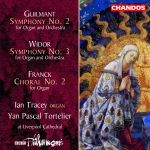 The three composers on this disc were all known to each other; their lives were directly interconnected, they all knew Cavaillé-Coll and presided over on of his instruments in the churches where they were organist.

Professor Ian Tracey performs three French symphonic organ works with the BBC Philharmonic under the baton of Yan Pascal Tortelier. This unique coupling was recorded on the enormous Willis organ in the Anglican Cathedral in Liverpool. Yan Pascal Tortelier has proved himself particularly successful in his native repertoire.

Conducting the outstanding BBC Philharmonic, releases have included Tortleier's French Bonbons, CHAN 9765, Lalo CHAN 9758, Boulanger CHAN 9745 Chausson orchestral works CHAN 9650 and Messiaen's Turangalila-symphonie CHAN 9678. Ian Tracey has had a life-long association with Liverpool Cathedral and its music. In 1980 he became the youngest cathedral organist in the country, and was appointed to his present position of Organist and Choirmaster of the Choristers two years later. His playing is in demand throughout Europe and the USA - he is a frequent broadcaster on the BBC and a regular soloist at the Proms.
The development of the organ in its symphonic guise, largely by the revolutionary new organ builder Aristide Cavaillé-Coll, led to the development of a new sound for a new age.

The three composers on this disc were all known to each other; their lives were directly interconnected, they all knew Cavaillé-Coll and presided over on of his instruments in the churches where they were organist. Franck was the first to imply symphonic treatment, although he eventually evolved his own personal and cyclic approach to composition. His Grand Pièce symphonique of 1862 preceded Widor's first Organ Symphony by a decade. By 1874 Guilmant had produced his First Organ Symphony. Widor's Symphony No. 3 for Oragan and Orchestra is in two sections, beginning with the organ below the surface of the texture before it breaks forth and enters directly into dialogue with the orchestra, ending in a great hymn of praise to all creation. Guilmant's Symphony No. 2 for Organ and Orchestra is an eclectic exercise culminating in a great fugue, the organ repertoire's most celebrated form. Frank's Choral No. 2 is not a set of embellishments like Bach's chorales, but rather developmental, 'cyclic' variations on new melodies.

Félix Alexandre Guilmant
Symphony No. 2 for Organ and Orchestra, Op. 91

Charles-Marie Widor
Symphony No. 3 for Organ and Orchestra, Op. 69

César Franck
Choral No. 2 in B minor