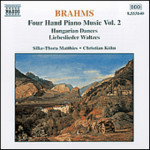 Brahms was a symphonist, a composer of concertos and sonatas, a writer of chamber music and songs and a poet whose Requiem was German not Latin. He was an arranger and editor, and he was a man of the dance, drawn as much to fragrant Viennese flirtations as swaggering Hungarian seductions, worshipping Schubert and the Strauss family no less than drinking in earthy gypsy vitality. "He would frequently come to our room and play to us," remembered Schumann's youngest daughter, Eugenie: "Schubert waltzes or his own Valses Op. 39, and wonderful, melancholy Hungarian melodies for which I have looked in vain among his published works; perhaps he never wrote them down". As a boy he helped his family by playing the piano for sailors in the dockside saloons of Hamburg. His professional career truly began in August 1850 when he met the Hungarian violinist Ede Reményi (1828-98), who had been a classmate of Joachim in Vienna. Reményi, the subject of the final pages of Liszt's The Gypsy in Music, 1859, was among exiles fleeing the Austro-Russian suppression of the 1848 Hungarian uprising: at that time Hamburg was a traditional escape route to North America and was a place jostling with refugees, each with his own exotic identity. The two young men gave many concerts together, touring Germany in April and May 1853. That year, Brahms met Liszt (to whom he took a dislike) and Schumann, the first publicly to recognize his genius. From Reményi Brahms learnt not only csárdás and verbunko (recruiting dance-song) tunes, some of which he wrote down and sent to Joachim, but also how to play from the soul in the gypsy style - with improvisational flamboyance, knife-edge tension, yearning passion, and orientally decorative attack. He discovered the allure of strangely intricate rhythms, the secret of infinitely flexible rubati, and like Liszt he became exposed to material he mistook for authentic Magyar folk-music, when it was in fact more properly a gypsyfication of what Bartók (1921) was later to classify as "melodies by popular amateurs ...educated dilettanti" - a hunting-ground Haydn, Beethoven and Schubert, too, had known well. Such a cocktail of popular dance and gypsy fancy ("the bitter-sweet sound of coffee-house music") left a lasting influence on his work - from (among many examples) the popular Hungarian Dances and Zigeunerlieder, through the weightier Variations on a Hungarian Song, Op. 21 No.2 and the finales of the G minor Piano Quartet and Violin Concerto, to the rhetoric of the thirteenth of the Handel Variations.