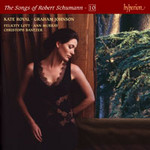 "Here's the story. Kate Royal recorded an album of Lieder with Graham Johnson for EMI's Debut series, but when it became clear just how exciting a prospect she is, the record company held the Lieder and went with a larger-scale debut recital. So it is good now to hear how Royal shapes up in miniatures by Schumann, again with Johnson. You can hear why the master accompanist is a fan." - Editor's Choice Gramophone Magazine Jan 2008

'Much of the singing is exceptionally lovely...'Waldegespräch' amply displays the dramatic flair one expects of a fine operatic artist … Johnson accompanies with his wonted sensitivity and his booklet notes are, as usual, exhaustive in their detail...The engineering is immaculate' (International Record Review)

Graham Johnson's Schumann songs series for Hyperion has reached its penultimate volume. In this series, the most exciting young artists - as well as the most experienced Schumann performers - have produced masterful yet intimately communicative performances of varied programmes of these wonderful works. Kate Royal is the soprano of the moment, at the start of her career yet an acknowledged great artist, and her performance here of the Eichendorff Liederkreis Op 39 is one where 'imagination, intellect and vocal technique are inextricably fused in the single moment of a song', as The Times wrote of her Wigmore Hall recital in January this year.

The disc also features enchanting vocal chamber pieces and less well-known songs such as the Drei Gedichte nach Emanuel Geibel. As ever, the disc includes comprehensive and fascinating notes supplied by Graham Johnson that fill out every detail of the genesis, context and publication of these masterpieces.

The Songs of Robert Schumann-Vol 1

The Songs of Robert Schumann Vol 9