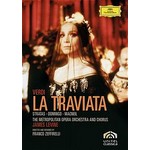 The unparalleled musical quality of the production is guaranteed by some of the world´s most famous musicians: The Metropolitan Opera Orchestra of New York, conductor James Levine and singers Teresa Stratas and Placido Domingo

"Stratas not only sings magnificently but also looks the role. With her large, dark doe-eyes, elegant cheekbones and small, slight figure that seems to have the strength of someone possessed, which Violetta is, Stratas is a screen presence as riveting to watch as to listen to…an acting performance of breathtaking intensity…Having cast the film very close to perfection, Zeffirelli has staged it in a way that serves both the film and the grandeur of the score." (New York Times)

"From the start Stratas's face reflects all the shades by which hope and fear, the public image and the inner self may be expressed. Both meet the notoriously disparate vocal demands of the role, though Stratas's voice sounds worn on the high notes. In the last act Stratas's relative slightness of vocal and physical build works to her advantage. Both are fine in the developing emotions of the great duet with Germont père...Levine's flair is most evident in vigorous rhythmic passages such as the dances and the card game" Gramophone Classical Music Guide, 2010

"It is Zeffirelli who dominates the filmed Met. production...But that does not detract from the passion or the tragedy...[Stratas] totally identifies with Violetta and movingly carries us with her...Domingo is Domingo, and he sings with the fullest, boldest ardour." Penguin Guide, 2010 edition ***