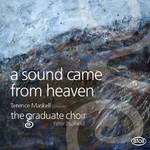 "This multi-ethnic Auckland choir of 35 has strong Polynesian numbers. That's a guarantee against bloodless singing and towards a full and rich tone with spontaneous emotional involvement. The choir sounds assured in the deepest classical heavyweights such as the double canon writing in Brahms' Geistliches Lied and their powerfully declamatory singing in Charles Stanford's long and pro-active sacred work. This and the rich choral sonority of David Hamilton's Karanga are the two standout items. They respond superbly to Hamilton's imaginative changes of colouring and density. Director Terence Maskell has shaped this into one of our most exciting smaller choirs."
Ian Dando, The Listener, April 2008

"The indefatigable Laird has been travelling around this year, catching Terence Maskell's Graduate Choir in various venues for its new album A Sound Came From Heaven. The title offering, a short anthem by the late Douglas Mews, shows the refinement and strength of Maskell's 35 singers as they take advantage of the spectacular spaces of Wellington's St Paul's Cathedral. While New Zealand music is a strong point of the graduate programme, Maskell's choir excels in everything from Victorian madrigals and skittish Schumann to gemutlich Gershwin."
William Dart, NZ Herald, 20 December 2007

My Spirit Sang all Day