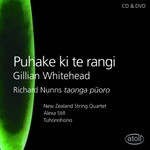 "In 1989, I heard for the first time, in a presentation given by Richard Nunns, the sounds of the taonga puoro (singing treasures), which spoke to me very strongly of the spirituality of my Maori heritage. I began working with these instruments several years later, and I have found myself drawn to explore in my own language the world of sound that might have surrounded pre-European Maori. Though the function of the instruments was of course very different in that world, I have tried to use them in a way that does relate to their traditional use."

Spirit of the Land

The Sleeping Beauty (The Complete Ballet)