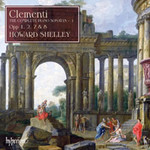 'Listening to this opener in Howard Shelley's complete cycle, recorded on a pristine-sounding modern piano, it is hard to imagine anyone else ever making them sound better … Shelley reveals this by treating each and every one of these works with the utmost respect.' (Gramophone)

'Listening to this opener in Howard Shelley's complete cycle, recorded on a pristine-sounding modern piano, it is hard to imagine anyone else ever making them sound better … Shelley reveals this by treating each and every one of these works with the utmost respect, his constant attention to the subtlest details of touch and phrasing meaning not only that things are never allowed to descend into the routine, but that he is more than able to respond to those moments when Clementi really does find a vein of poetry … The Andante cantabile of Op 8 No 1 is a gem, the excellent Op 7 No 3 is strongly expressive throughout … Shelley realises them all while also coping coolly with the more finger-breaking exhibitions of virtuosity … Shelley's performances, which seem well capable of achieving definitive status, make you wonder if Mozart was hiding some genuine discomfort' (Gramophone)

'I have long admired Shelley's spaciousness of phrase and generosity of tonal range, and this latest offering certainly does not disappoint on either account. The Opp 1 and 2 Sonatas benefit from a fresh and spirited viewpoint, the leisurely lyrical lines nevertheless beautifully compact … This set may well encourage listeners to reappraise Clementi, not in the shadow of Mozart of Beethoven but in light of the composer's inestimable contribution to classical style' (International Record Review)

'Launching his complete Clementi cycle in impressive style, Howard Shelley tosses off chains of thirds and octaves with elegant virtuosity, and brings an ideal expressive flexibility to the more personal sonatas' (Daily Telegraph)

This is the first volume in a complete chronological survey of the Clementi sonatas which we hope to complete in six '2 for the price of 1' double CD sets released over the next three years. There is very little competition for this repertoire and indeed this volume appears to include the first ever recording of Clementi's six sonatas Opus 1.

Muzio Clementi was for much of his long career one of the most famous musicians in Europe. Around the turn of the nineteenth century his public esteem was probably second only to that of Haydn, and, a decade or so later, Beethoven. But unlike the reputations of these other two, Clementi's fame as a musician rested almost solely upon his exploits, as both player and composer, at a single instrument, the piano. And the vast majority of his compositions are sonatas for that instrument. This is a fascinating body of work which spans European musical life from Scarlatti to Chopin.

This is Howard Shelley's hundredth CD release and Hyperion congratulates him on an extraordinary achievement.