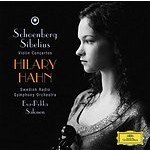 "Hilary Hahn's wonderfully assured and generously expressive performance shows what an approachable and important work it is, and one that deserves a place in the Austro-German tradition alongside Berg's almost exactly contemporary violin concerto."
(Guardian March 2008)

Hilary Hahn was born in Lexington, Virginia, USA, and moved to Baltimore in 1983, where she had her first violin lessons in a local children's program. In 1985, she began five years of study in Baltimore with Klara Berkovich, a native of Odessa who had taught at the Leningrad School for the Musically Gifted for 25 years before emigrating to Baltimore. In 1990, she gave her first full recital, at Leakin Hall in Baltimore, and entered the Curtis Institute of Music in Philadelphia to study with 83-year-old Jascha Brodsky, the last surviving student of Eugène Ysaye. This year she also made her first radio appearance.

Alongside her solo work, Hilary Hahn has a deep interest in chamber music. Nearly every summer since 1992 she has appeared at the Skaneateles Chamber Music Festival, both as a chamber musician and as a soloist with the festival orchestra. In other projects, she can be heard as featured soloist on the soundtrack of M. Night Shyamalan's 2004 film The Village and as a guest artist on the track "To Russia My Homeland" from the 2005 album Worlds Apart by Austin alt-rockers . . . And You Will Know Us By the Trail of Dead.