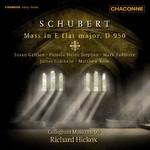 Schubert's final mass and most ambitious setting was composed during the summer of 1828, only months before his death. It was premiered posthumously, on October 4, 1829, under the direction of his brother, Ferdinand.

Hot on the heels of Richard Hickox's highly acclaimed classical masses of Haydn and Hummel and Beethoven, comes Schubert.

The same award winning team has been assembled to give more world-class performances.

Schubert's final mass and most ambitious setting was composed during the summer of 1828, only months before his death. It was premiered posthumously, on October 4, 1829, under the direction of his brother, Ferdinand. Much more than his previous efforts in the genre, it is a choral mass, relegating the vocal soloists to three brief episodes to allow for large chorus passages, and provides an extremely active role for the orchestra. Today, the Mass in E Flat is increasingly acknowledged as an individual masterpiece; powerful and disquieting, more monumental than the fifth, but likewise seeking to reconcile liturgical grandeur with Schubert's own subjective romantic feeling, whilst still influenced by Haydn, Beethoven and Bach. Its concern for splendour is most obvious in the huge set-piece fugues at the end of the Gloria and Credo but all the time liturgical tradition is coloured by an individual and sometimes unsettling chromaticism, possibly evoking the personal pain he was suffering, not only physically but also the anguish of questioning his faith. The result is some of the most violent anguish encountered in a setting of the text.

Richard Hickox has long wanted to record this powerful work. The recording follows the successful concert at the 2007 BBC Proms. The same stellar cast is brought together, including Susan Gritton, James Gilchrist and Mark Padmore, accompanied by Collegium Musicum 90. The Guardian commented on the Proms performance: 'it was graciously sung and conducted…' The Daily Telegraph wrote: 'Wednesday night brought Schubert's wonderful and rarely-performed late E flat Mass, performed by some fine soloists and the 'early music' orchestra and choir Collegium Musicum 90, conducted by Richard Hickox. It's close to being Schubert's last piece, and has an amazing harmonic daring mingled with a minatory severity - a very potent mix'.

The recording is dedicated to the memory of Francesca McManus who, before her death, was for many years the manager of CM90.