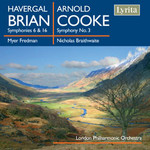 "The notes for the Havergal Brian works are splendid as is to be expected from Calum Macdonald...Three intrinsically pleasing tonal-melodic symphonies of real creative fibre."
(Recording of the month MusicWeb March 2008)

"The notes for the Havergal Brian works are splendid as is to be expected from Calum Macdonald. I am afraid that those for the Cooke symphony by Hugo Cole are of the opaquely descriptive type but, as ever, it's the music that matters! Three intrinsically pleasing tonal-melodic symphonies of real creative fibre."
(Recording of the month MusicWeb March 2008)

"Havergal Brian's Sixth and Sixteenth Symphonies are both single-movement, multi-sectional works lasting less than 20 minutes apiece. No. 6 sports particularly imaginative orchestration (a principal theme on solo glockenspiel), culminating in a march-extravaganza that recalls the central development section of Mahler's Third. No. 16 also is full of evocative sounds, though its various episodes are even more tersely argued and the harmony is a touch more gnarly than its predecessor. Both are superb works, and these are fabulous performances. Indeed, this is the finest disc of Brian symphonies ever made, and since it has never appeared on CD before, it's a mandatory acquisition for fans of 20th century British music.

Arnold Cooke's Third Symphony, like all of his music, sounds a good deal like Hindemith. Textures in quick movements tend to be contrapuntal and busy, but the work is more tuneful in the conventional sense than Hindemith typically is. As long as you're not looking for striking originality, you should enjoy this music very much. It's well crafted and not a moment too long. Incidentally, Cooke died in 2005 at the ripe old age of 99. No one seemed to care at the time, which is a pity; he had real talent. Nicholas Braithwaite leads a buoyant and vital interpretation, and as with the Brian, Lyrita's sonics show us why these recordings continue to deserve their legendary status."
(ClassicsToday 10/10)