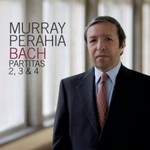 "Lots of performers play Bach on the modern piano. No one does it better than Murray Perahia, whose command of sonorities, dynamics and phrasing makes you hear the piano as an ideal Baroque instrument." - The San Francisco Chronicle

"If there's a single moment throughout the three Partitas on this gorgeously engineered disc where Murray Perahia produces less than a vibrant, singing sonority, sculpts a polyphonically unaware phrase, or fails to nail a perfect tempo, then I've missed something. Certainly you shouldn't miss the marvels of Perahia's intelligent, technically refined, and inherently musical Bach pianism. At first the C minor Partita's Grave introduction sounds slightly fragmented, phrased in a stop/start manner. But a quick glance at the score reveals that Perahia simply is observing the rests. I fervently hope that the remaining three Partitas will follow in due course."
(ClassicsToday 10/10 April 2008)

"Lots of performers play Bach on the modern piano. No one does it better than Murray Perahia, whose command of sonorities, dynamics and phrasing makes you hear the piano as an ideal Baroque instrument. These perfectly judged accounts of three partitas are full of persuasive insights and beguiling subtleties. In Partita No. 2, Perahia gives the Courante a thrusting momentum in advance of a patient and spacious Sarabande; his Rondeaux flexes around smartly articulated seventh intervals. The opening Fantasia in Partita No. 3 is a marvel of transparency and balance between the two hands; the Gigue gets a hypnotically heavy tread. Nothing is lovelier than the languid Allemande in Partita No. 4. Perahia just gets better and better". - The San Francisco Chronicle

4 Stars - "The love affair between Murray Perahia and J.S. Bach continues. In the American-born pianist's first Sony-BMG recording in three years, he plays three of the six keyboard exercises that Bach described as "galanteries composed for music lovers to refresh their spirits".

As with his set of "Goldberg Variations" of eight years ago, Perahia achieves an exquisite balance between pianistic sensitivity - enough pedal to give the sound a glow, enough rubato to make a phrase "sing"-- and disciplined attention to the Baroque form and energy of Bach's music. One might like a few more ornaments (Bach played loads), but they tend to muddy the waters on a piano. Why, one wonders, did we love Glenn Gould's dry and sometimes willfully speedy Bach interpretations of the 1950s and '60s? Because he made us listen to the music again, after decades of heavy pedal and soupy romantic interpretation. Perahia makes us hear the music again, too, by playing with warm-heartedness to lift the notes off the page and set them dancing in your mind. Listen to the fugue that ends No. 4, for example, and try to avoid smiling. Nos. 1, 5 and 6 can't be far behind". - The News & Observer (North Carolina)

5 Stars - "This is time for rejoicing. He's back, the man dogged by bad luck. After an absence of - believe it or not - more than three years, Murray Perahia is back on the scene, and he has been in the recording studio in order to take advantage of the moment. And naturally, Perahia chose to record music by his all-time idols no. 1 and no. 2: Bach and Beethoven. The results, at least for the Bach (Beethoven is to follow later), are of a compelling intensity. Perahia plays the Partitas nos. 2 through 4, in C minor, A minor and B flat respectively, and his reading is characterised above all by a profound and sometimes solemn gravity, an almost philosophical seriousness which never triumphs, nor seeks to be chic or extravagant. Perahia proves himself to be a servant of a dual material, a twofold sense of being and existence: firstly as the servant of the composer and then as the servant of his idea. The tempos are all relatively moderate in this project: the recordings are impressive for the pianist's exquisite supplenessof delivery, his wonderful (and in the pedalling, wonderfully filigree) balance of pressure and lightness of touch (which never falls into the sphere of weightlessness, since Perahia presumably is too afraid of going down that route). Uninsistently insistent, Perahia is always aware of the nuances, especially in the slow movements, the sarabandes and allemandes. And what a skilled diversity Perahia demonstrates in his interpretation, what spectrum of tonal shades, all masterfully evident in the longest allemande in Bach's piano oeuvre, the piece from the D major Partita. Here too, we learn what a great story-teller Perahia is, the diverse range of his playing. This recording, like many others, is a joy to listen to". (Translated from the French) - Rondo