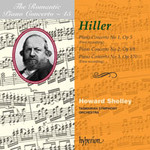 "The indefatigable Shelley puts us in his debt again by uncovering these gems." (Editor's Choice Gramophone June 2008)

'It is clear that soloist/conductor and ensemble share a close musical relationship, with often-thrilling interplay occurring in the inordinate amount of back-and-forth between piano and orchestra in these works. Plenty of this is on display in the Third Concerto, a particularly fine work that balances devilishly demanding pianistic pyrotechnics with the prevailing significance of expression as specified by the composer … Shelley's virtuosity and musicianship glisten in the opening movement, with its haunting development section … Shelley and his TSO ensure that the F-sharp minor Second Concerto is every bit as successful, from its attention-wresting opening gambit, to the marvellously angular piano melody at about 2:08 in the Andante espressivo, to the uplifting appearance of the second subject in the major at the end of the concerto. Even the early, bravura F-minor concerto is full of deft wit and charm, its finale a magnificent and forward-looking crossbreed of waltzes by Chopin and Johann Strauss that allows Shelley to exploit his magnificent pianism to the full … An enchanting disc' (MusicalCriticism.com)

"The indefatigable Shelley puts us in his debt again by uncovering these gems. Hyperion's crusade to dust off long-forgotten classics has resulted in some real gems, quite a few of them, it seems, played by Howard Shelley. This latest is no disappointment. Hiller, a big noise in the 19th century, sets his soloist cruel challenges and Shelley meets them and then some. In the Second Concerto, in particular, he fields both a bravura display of pianistic skill and great delicacy."
(Editor's Choice Gramophone June 2008)

The Romantic Piano Concerto series continues to bring undiscovered works to the listening public, performed by the greatest piano virtuosos of today. The composer Hiller was admired by Schumann, who described him as the exemplar of 'how to combine orchestra and piano in brilliant fashion'. One of the most imposing musical personalities of the nineteenth century, close friends with the likes of Rossini, Liszt, Berlioz and particularly Mendelssohn, Hiller was nevertheless largely forgotten less than twenty years after his death as musical fashion changed. The Second Concerto is a genuine forgotten masterpiece, and Hyperion has been looking for the right opportunity to record it for many years. The First and Third concertos are both first recordings, and indeed the Third was never published. A combination of the appealing and the unknown makes this a classic RPC disc. Howard Shelley is a veteran of the Romantic Piano Concerto series. He conducts the Tasmanian Symphony Orchestra here from the piano.