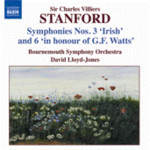 "This latest instalment maintains the high standards of the previous two releases, offering fine playing, which is by turns spirited and poetic, and very good sound. As ever, David Lloyd-Jones is thoroughly inside the music."
(MusicWeb Oct 2008)

Completed in 1887, Stanford's 'Irish' Symphony enjoyed immediate and widespread success, continuing to be played well into the twentieth century. The 'Irish' subtitle indicates its frequent deployment of folk-tunes as melodic material, although the work never strays far from the Austro-German symphonic tradition. The 1905 Sixth Symphony, by contrast, received only two hearings before succumbing to an eighty-year oblivion. The subtitle, 'In honour of the life-work of a great artist: George Frederick Watts', is important: Watts (1817-1904) was among the most lauded British artists of his era and Stanford's work, if not overtly programmatic, was influenced by instances of Watt's legacy - for example the equestrian statue in Kensington Gardens, London.

An Anthology of English Song (2 CDs)