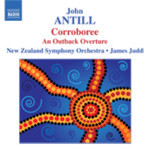 "This excellent recording of the complete ballet by James Judd and the New Zealand Symphony orchestra fills a big gap. With precision and charm, this disc brings out its originality and its primitivist colouristics."
(Sydney Morning Herald)

"You would be reluctant to suggest John Antill's Corroboree for the citizenship test but culturally literate Australians ought to have had more opportunities to get to know this landmark work in recent years. This excellent recording of the complete ballet by James Judd and the New Zealand Symphony orchestra fills a big gap. Championed by Eugene Goossens in 1946, it can be seen as a musical offshoot of the Jindyworobak movement of the 1930s and '40s, which sought distinctive Australian literary identity in Aboriginal myth. With precision and charm, this disc brings out its originality and its primitivist colouristics. The soft chords that close Dance To The Evening Star, the woodwind precision in A Rain Dance and the wispy strings in Spirit Of the Wind are captured with welcome clarity."
(Sydney Morning Herald)

"Naxos' engineering is a touch on the dry side, but this works particularly well in Corroboree, allowing maximum clarity without sacrificing impact or dynamic range. It would be very interesting to hear more of Antill's work to see if the obvious talent on display in this single piece found its way into his work generally."
(ClassicsToday 10/10)

Australian composer John Antill is best remembered for his exuberant, outstandingly successful and ever-popular ballet Corroboree. Drawing on material Antill notated in 1913 at an Aboriginal Corroboree (a type of ritual ceremony) in Botany Bay and on his subsequent research on Aboriginal music, Corroboree is widely recognized as a landmark in Australian music history. Antill's Outback Overture is a charming concert opener, reminiscent of Stravinsky's rhythmic energy, British folk melodies, Copland's harmonic influence and Grainger's humour.