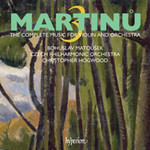 'Martinu was prolific in every field, but perhaps no more so than in the concerto, where he explored a variety of forms and instrumental combinations … Bohuslav Matoushek plays all three works here with energy and an imaginative range of tonal colour, while the accompaniments from Christopher Hogwood and the Czech orchestra are equally resourceful' (Daily Telegraph)

This is the third volume in Hyperion's set of the complete works for violin and orchestra by Martinuo, featuring the wonderful Bohuslav Matoušek with the Czech Philharmonic Orchestra under Christopher Hogwood. Many first recordings are included in the series, as well as works totally unperformed outside the Czech Republic. The two very different versions of Martinuo's Suite concertante are fascinating rarities. The only well-known work on this disc is the Rhapsody-Concerto for viola and orchestra: a lyrical, virtuosic piece written for Jascha Viessi and one of the most performed viola concertos of the twentieth century.

The Very Best of John Rutter

Symphony No. 6 (with Suk - Serenade in E flat major & Into a New Life)