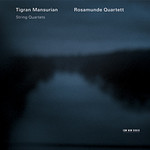 "The performances by the Rosamunde Quartett of all three works bespeak utter identification with the music and create a very finely tuned chiaroscuro of quiet dynamics."
International Record Review

"Both the first and second string quartets by the Lebanese-born Armenian composer Tigran Mansurian are predominantly slow and mournful pieces, each completed in 1984 and written in memory of a recently dead friend. The language is direct, but Mansurian is not of any formulaic minimalist school. Rather, his structures are built on a richness of harmony and melodic expression that allies him to late Beethoven. Both works - each cast in three movements - and the eloquent and dark single movement Testament … are played with miraculously sustained poise by the Rosamunde Quartet."
Stephen Pettitt, Sunday Times

"Mansurian writes extremely well for quartet; the textures and polyphonic working are basically traditional, with little in the way of outré effect. … The Second Quartet consists of three slow movements, putting one in mind of the five Adagios of Shostakovich's Fifteenth Quartet. This is a work of ravishing if crepuscular beauty, deeply tonal, whose melodic language is partly influenced by a song by the much-loved Armenian national composer Komitas as well as by Armenian sacred music of the middle ages. … The performances by the Rosamunde Quartett of all three works bespeak utter identification with the music and create a very finely tuned chiaroscuro of quiet dynamics."
Calum MacDonald, International Record Review

leggiero, pesante: String Quartet No. 1 and other chamber works

The Seven Last Words of our Saviour on the Cross