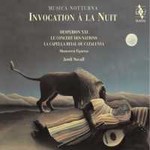 Did you know that most Alia Vox albums were recorded between 1 and 4 am? Not only because of tight recording schedules, but also because the night creates an very special quality of silence... This double album is the best possible tribute to Alia Vox' short but intense history. Not just an 'anniversary CD': it is a fascinating musical journey, based not only on existing material, but also on unreleased recordings (Charpentier - CD2 track 5) and on future albums (CD2 track 1 was recorded for the upcoming project Jerusalem). Recordings from the Astrée catalogue are also included in this definitive overview of a major component of Jordi Savall's creative process: the night.

+ an excerpt from the forthcoming double album: Jerusalem