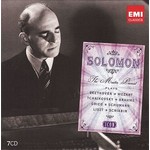 "This hefty seven-disc set is a consolidation of some of Solomon's most august recordings.

Newcomers to his art will have to balance the pleasures of acquiring the Third and Fifth Beethoven concertos without the rest of the cycle. Similarly you have the Second Brahms concerto but not the First - and some of his greatest, most profoundly important Beethoven sonata recordings but not all that he recorded. So even at this price bracket one might still be tempted to augment this box with the extensive Testament reissue series.

That's a dilemma that can only really be resolved given one's inclination toward comprehensive collections. The performances themselves are famously enshrined in recorded history. A frequent collaborator on disc was Herbert Menges, piano-playing brother of the violinist Isolde. He was an adept, underrated musician who directs authoritatively. Solomon had earlier recorded the C minor Concerto on 78s with Boult; here, with Menges, he's just as persuasive. He eschews the galvanic and declamatory in favour of an aristocratic explication of the solo line whereas in the Emperor this profile works even better. Here he is at something like his finest, vesting the slow movement with time-numbing beauty, refraining from externalised show in the outer movements, directing things inward with no less of force or weight. .

The Grieg-Schumann pairing is the piano equivalent of the violinist's Bruch-Mendelssohn. In both cases mere routine will not do but neither will gaucherie and striving for effect. Here we find nobility in profusion. In truth the Grieg reflects Solomon's reserve rather more than some may like but his avoidance of the flamboyant and the gestural preserves a reading of aquiline self-abnegation and poetic refinement. The Schumann was a favourite of his and his lineage via Mathilde Verne, a pupil of Clara Schumann, was always seen to offer a particular slant on the repertoire - though his time with Verne was wretched. His playing is unselfconscious, relatively straightforward but illuminated by tonal beauty and poetic phrasing. The Philharmonia winds distinguish themselves throughout.

The third and fourth discs are given over to "named" Beethoven sonatas, amongst Solomon's most revered recordings. Olympian grandeur suffuses the Pathetique the slow movement of which has absolute refinement of spirit and lyricism. The Moonlight reminds one that his famously slow tempo for the opening movement was balanced by fearsomely animated drive in the finale. Clarity of articulation elevates the Waldstein to elite status whilst Les Adieux is as fine an example of his sonata playing as you will find, notwithstanding the perhaps greater reputation of the Hammerklavier and Appassionata. Both these last two are contained in the indispensable fourth CD. These are performances of measured gravity and colossal architectural and tonal perception. The extraordinary tempo sustenance of the Adagio sostenuto, so emblematic a feature of Solomon's art, is simply one example of his transcendent control in this repertoire.

Moving on to the Brahms B flat Concerto with Dobrowen we find myriad subtleties of balance and colouration, generated through intellectual probity of the highest order. Dobrowen was a first class accompanist and a Brahmsian of distinction and the performance is just as fine as Solo's First Concerto with Kubelík. The Tchaikovsky - again with Dobrowen - is badly balanced with over prominent winds to get a doubtfully big perspective. Demerits here to the Walter Legge-Arthur Clarke team. Nevertheless the performance reprises Solomon's Harty-led triumph back in the days of recorded yore, one that's seen the reissue rounds over the years. For those who consider Solomon over cautious and cerebral the virtuosic flourishes here should put them right.

The sixth disc gives us a zestful Scarlatti sonata and a rather lugubrious Bach-Busoni Wachet auf. The two Mozart sonatas confirm Solomon's reputation as an interpreter of the highest refinement and the single concerto by the composer enshrined in this box, the C minor K491, is an emotively multifaceted and lyrically inspired reading, once more with the Philharmonia. Those for whom his Mozart was not tensile or muscular enough should note Solomon's playing of the Saint-Saëns' first movement cadenza and the rapt simplicity - the inescapable phrasal rightness - of his custodianship of the Larghetto.

There are certainly fireworks in the Liszt Hungarian Fantasia - dramatic and dark-hued - and the final two items are both powerful concerto statements; the Scriabin Concerto in F sharp minor and the concerto written for Solomon by Bliss. You'll find the world première performance of the Englishman's Concerto - in New York - on APR. This EMI traversal is the first commercial recording given with the Liverpool Philharmonic then - in wartime - Britain's leading orchestra. Bliss's romantic extroversion and the touching depth of his concerto's central movement received a perfect exponent in Solomon. The Scriabin was not issued at the time of its recording, 1949. The piano is backwardly balanced - another Legge/Clarke mistake. But just listen to the poetic delicacy of the second movement theme before the unleashing of the variations.

So a strong, solid conspectus of Solomon's art. Strong on Beethoven of course, with a representative concerto arsenal; good representative Mozart; a serious-minded collection in fact, befitting Solo's Olympian disposition and reportorial choices. At the price it's a steal and is sure to encourage further investigation of his art not covered here - the miraculous wartime Chopin sides; the remainder of the Beethoven sonatas set down before his stroke; the Archduke Trio with Pini and Holst; his Schubert; the Brahms concerto with Kubelík and the Op.5 sonata; the Cluytens-directed Beethoven concertos; Carnaval. So many more. Try Testament for those.

It must be noted that some of the original recordings were not brilliantly engineered in the first place and remastering hasn't been able to alleviate congestion, faulty balances and spotlighting. That's a small matter however when put against such noble, characterful and poetic musicianship such as Solomon displays throughout this set." (MusicWeb Sept 2008)

Icon: Rudolf Kempe: The Genius of the Podium