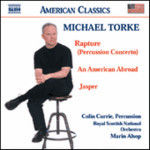 "Torke's post-minimalism remains a splash of cool water on the face, and, whether rhythmically charged or poignant, this music is infectious. Critic's Pick"
- Andrew Druckenbrod, Pittsburgh Post-Gazette, 7/28/03

"Soloist Colin Currie plays as if he had three or more hands at times, never missing a beat. To call this virtuoso playing would be to create a supreme understatement. One comes away from this recording wishing it had been a DVD-V disc so that the visual part of the performance could have been experienced as well as the audio. The orchestra provides excellent support...this is a thoroughly enjoyable disc of music not to be heard anywhere else. And since it is in the Naxos series, one can adventure and purchase it for minimal cost. It is by offering this kind of bargain that Naxos has become such a prominent and successful company."
- Rad Bennett, Soundstage, June 2003

"Michael Torke's music is distinguished by a considerable energy and great feeling for orchestral colour, both of which are in ample evidence on this disc. In these three works, written between 1998 and 2001, he shows himself to be broadening stylistically and evidencing a vitality that may fairly be described as life-enhancing...A splendidly played and recorded disc, this is an important release for Torke and shows him as a composer at the height of his powers."
- John Kersey, Tempo: A Quarterly Review of Modern Music, April 2003

An American Abroad
Jasper
Rapture (Concerto for Percussion and Orchestra)