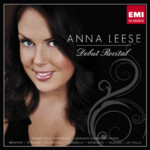 "The loveliness of her presence and of her art is indeed beyond compare. She shines like a flawless jewel, polished and ready to be placed in whatever crown the fates have prepared for her"
The Tribune, March 11, 2007

"I have rarely seen a substitute seize her chance more exuberantly. With her diamond-clear voice and natural comic timing she seemed born to play this part. Leese is one potential star in the making."
The Times October 25, 2006

"Hers is a big, bright, gleaming soprano with richly coloured lower notes, and she uses it with taste and confidence beyond her years: one might think it rather cruel of a director to place a student singer atop a grand piano for the Czardas, but she carried it off with aplomb."
Seen and Heard, November 2005

Soprano Anna Leese has recently completed the RCM Benjamin Britten Opera course under Ryland Davies, having completed a MusB degree with First Class Honours at the University of Otago in 2002, under Isabel Cunningham.

Anna had a predominantly choral introduction to music through singing in church choirs, and was a member of the New Zealand Secondary Students choir, and the Tower New Zealand Youth Choir before she decided to concentrate on solo voice.

Anna has won an impressive list of awards and aria prizes, including the 2001 Dame Sister Mary Leo Scholarship, the 2002 Mobil Song Quest, the 2002 Lockwood Aria scholarship and the 2003 McDonalds Aria Scholarship in Sydney, held in the Sydney Opera House.

Operatic roles include Ilia in Mozart's Idomeneo with the Auckland Opera Studio, Female Chorus in Britten's The Rape of Lucretia, Fiordiligi in Mozart's Cosi Fan Tutte and Rosalinde in Strauss's Die Fledermaus, all for the Benjamin Britten Opera School and Juliette in Gounod's Romeo et Juliette with the British Youth Opera. She has performed the role of Tamiri in Mozart's Il re Pastore at the Linbury theatre, Royal Opera House (where she made her debut at age 24) and three Mozart heroines Fiordiligi, Countess Almaviva and Tamiri with the Classical Opera Company.

In 2006 Anna performed in a Mozart Prom with SCO and Norrington. With the Royal Opera House, understudied Arminda in Finta Giardiniera, Musetta in La Boheme and in January 2007 she sings the role of Michaela in Bizet's Carmen with ROH. Upcoming recitals are at Wigmore Hall, Colchester festival and Ascoli Piceno, and opera roles include Musetta, Erste Dame and Echo for the Royal Opera House, Covent Garden, Musetta for Canadian Opera, Tatyana for Flanders Opera and New Zealand Opera, Pamina and Fiordiligi for Opera Koln, and Antonia (Hoffmann) for APO in concert