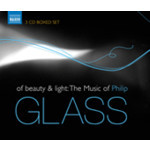 This is Glass in full flight, with an aural illusion of the work speeding up yet retaining a constant pulse throughout the work's lively changes of texture and melodic figuration." --New Zealand Listener

"Philip Glass is a minimalist in a rut. His style has changed little in the past 25 years. As the most financially successful classical composer alive, Glass is often criticised as facile and, at best, insidiously effective as in his Heroes Symphony (1996), which has its ups in the two outer movements and downs in some of the inner ones. Rather than a symphony, the 46-minute Heroes is more a suite of six independent pieces recycled from the David Bowie/Brian Eno rock album collaboration. His 24-minute The Light is a fine tone poem depicting the Michelson/Morley experiment confirming the uniform speed of light. This is Glass in full flight, with an aural illusion of the work speeding up yet retaining a constant pulse throughout the work's lively changes of texture and melodic figuration." --Review by Ian Dando, New Zealand Listener

"Full marks to Naxos for its continuing 20th-century music releases... The disc contains a fine performance of the [Glass Concerto]: Adele Anthony proves an eloquent soloist whose appealingly understated playing, well articulated and carefully coloured, fits in nicely with the stark, unrelenting formalism of the work... Takuo Yuasa proves a fine proponent of Company and the two sections from Akhnaten, instilling them with a sometimes unsettling sense of urgency in well-shaped readings."
- BBC Music Magazine