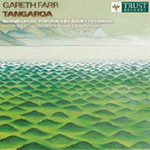 'Tangaroa' features eight of Farr's works for marimba performed by Jeremy Fitzsimons, founding member and director of Strike from 1993-2003 and performer on the RIANZ 'Best Classical Album' of 2004.

Throughout Polynesia, Tangaroa is the god of the sea. While Gareth Farr is probably best-known to audiences as the composer of mighty orchestral scores, one of his greatest strengths as a composer lies in the field of chamber music, particularly works for percussion. Following on from Farr's previous five successful releases, 'Tangaroa' features eight of his works for marimba performed by Jeremy Fitzsimons, founding member and director of Strike from 1993-2003 and performer on the RIANZ 'Best Classical Album' of 2004.

Fitzsimons is joined by Bridget Douglas who is Principal Flute of the New Zealand Symphony Orchestra, Kristie Ibrahim who is a Montreal percussionist and duo partner with Fitzsimons in Double Lateral, and pianist Dan Poynton, who has appeared on two recordings featuring the collected piano music of Douglas Lilburn.

'Tangaroa' features five never-before released works: the title work Tangaroa, inspired by the mighty Pacific Ocean; Tuatara, named after a remarkable reptile; Three Etudes, a solo work exploiting the sonic possibilities of the marimba; Dialogue commissioned by Trust especially for this recording and first performed by the featured artists; and Spook, musically elusive and taking the marimba to an extreme of virtuosity. Also featured is the everpopular Kembang Suling and two delightful variations of Duggan Theme, composed originally for the television police-drama.