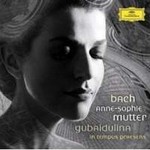 "Gubaidulina's new violin concerto In Tempus Praesens (In the Present Time) is also steeped in its composer's deep spirituality, using the violin as a symbolic protagonist in an immensely moving journey of faith. Rough-hewn at times, at others delving into shimmering, magical soundworlds, it could not have a a finer advocate than Mutter, whose searing cadenzas punctuate sonorous orchestral writing that seems to sprawl over secret Bachian chorales.

The coupling of this work with two Bach Concertos is inspired. Bach's A minor Concerto, with Mutter leading the Trondheim Soloists, has an Andante of flute-like delicacy and a Finale that is furious in its energy.

Both works are beautifully caught on disc, with the Deutsche Grammophon engineers being particularly responsive to the iridescent hues that Valery Gergiev and the London Symphony Orchestra unleash in the Gubaidulina."
(William Dart NZ Herald)

Anne-Sophie Mutter's first Bach recording for DG couples his Concertos BWV 1041 and BWV 1042 with the world-premiere recording of the Concerto commissioned by her from Sofia Gubaidulina, the Russian composer who regards Bach as her greatest source of inspiration

For the Bach Concertos Mutter reunites with the Trondheim Soloists, with whom she recorded the Vivaldi Four Seasons album that has sold more than 350,000 copies.

The combination of Bach and Gubaidulina will appeal to lovers of Bach and instrumental music in general, as well as to listeners interested in discovering something new.

GUBAIDULINA:
In Tempus Praesens
Concerto for violin and orchestra