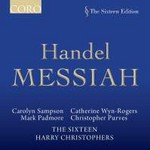 "a Messiah of splendid vitality and authority, a summation of Christophers's and The Sixteen's Handelian enterprise." International Record Review

"Smoothly yet energetically planed on the period instruments of the Sixteen orchestra and impeccably refined chorus, the text is lovingly caressed rather than ebulliently dramatised. The Hallelujah chorus is no rambunctious run, Part II's "lift up your heads" didactic rather than celebratory. Floating over the top are Carolyn Sampson's porcelain soprano, and the alto Catherine Wyn Rogers, whose He was Despised acquaints us with grief indeed." The Times, 9th August 2008 ****

"Three of the four outstanding soloists - fine Handelians all - cut their teeth in the choir, and Catherine Wyn-Rogers has been a regular soloist. Crucially they don't stand apart, regally dispensing arias between familiar chorus; pre-eminently this is an 'ensemble' Messiah with everything (including the superb instrumental playing and imaginatively realised continuo) directed towards the unfolding of an involving theological narrative." BBC Music Magazine, September 2008 *****

"The Sixteen's choral singing has clarity, balance, shapely moulding of contrapuntal lines and plenty of unforced power. This fine team performance is a safe recommendation for anyone wanting to acquire an all-purpose "period" Messiah." Gramophone Magazine, November 2008

"a Messiah of splendid vitality and authority, a summation of Christophers's and The Sixteen's Handelian enterprise." International Record Review

Hot on the heels of their landmark appearance on BBC Four's Sacred Music programme Harry Christophers and his award-winning ensemble The Sixteen are releasing a brand new recording of Handel's Messiah. On this disc The Sixteen and Harry Christophers are joined by four soloists, all revered Handelians who have had a long association with the choir - Carolyn Sampson, Catherine Wyn-Rogers, Mark Padmore and Christopher Purves. Indeed, Carolyn, Mark and Christopher all sung as members of the choir before embarking on successful solo careers.

The Sixteen has performed Messiah over 150 times and over the years the two have become synonymous with one another. Arguably the most famous oratorio ever written and certainly Handel's best known work, Messiah needs little introduction. Composed in a staggering 24 days, Messiah was first performed in Dublin in 1742 where it received a rapturous welcome.

Harry Christophers first conducted Messiah in 1985 and has been celebrated by audience and critics alike for his gripping and inventive interpretations ever since. Over the years 'The Sixteen's Messiah' has become almost legendary with audiences flocking to performances year after year and, of course, Harry's interpretation of this great masterpiece has changed and developed.

This exceptional new recording demonstrates an accomplished expertise, honed over the past 23 years.