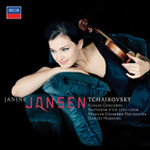 "Vital, original playing from the all-singing, all-dancing Janine Jansen. It's an old favourite, but Janine Jansen doesn't try to do anything special (in other words, peculiar) with the Tchaikovsky Violin Concerto. Instead, she plays it straight, finding all its songfulness and proving herself equal to the drama. It's a thrusting account that manages to feel reflective and Daniel Harding provides perfect support. Adrenalin and affection in equal measure." (Gramophone Editor's Choice Jan 2009)

"A brilliant performance of Tchaikovsky's Violin Concerto... Jansen made every phrase fly... she relished the epic scale of the first movement, the lyrical oasis of the second and the vivid drama of the finale." The Guardian

"Poised, intelligent and remarkably pure of intonation for a live performance, Janine Jansen's Tchaikovsky certainly knows its own mind. What's truly memorable? From Jansen, the powerful high register and full-toned harmonics of the cadenza; from Daniel Harding and his Mahler Chamber Orchestra, nicely balanced in relation to the soloist, the airborne quality of the Polonaise and the oboe solo in the finale's one reflective sequence." (BBC Music)

Jansen has already wowed the world with her performances of Tchaikovsky's tour de force.

"Janine Jansen impressed again in Tchaikovsky's Violin concerto with the technical precision and musical bravura with which she played this beloved repertoire." NRC Handelsblad

Souvenir d'un lieu cher provides a delightful link to the Concerto recording. The first movement 'Meditation' was initially intended as the Concerto slow movement, before it was later replaced by the 'Canzonetta'.