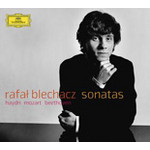 "Rafal Blechacz is a true talent...this is an important and thoroughly enjoyable disc. Tracking Blechacz's career successes is turning out to be an unalloyed joy."
(MusicWeb March 2009)

"Rafal Blechacz is a true talent, as his previous discs have shown. I first came across him in 2005, on a CD Accord disc of Schumann, Liszt, Debussy, Szymanowski and Chopin. More recently, he issued a superb disc for the 'Yellow Label', an account of the Chopin Préludes that can hold its own with any of the more famous established versions...this is an important and thoroughly enjoyable disc. Tracking Blechacz's career successes is turning out to be an unalloyed joy."
(MusicWeb March 2009)

Rafal Blechacz's debut album for Deutsche Grammophon, the complete Chopin Preludes, went platinum in Poland within a month of its release. He now follows up this success with a recital devoted to the "Viennese Classics": Haydn, Mozart and Beethoven.

A compelling overview of the piano sonatas of these three great masters, combining Haydn's mature E flat major Sonata with Mozart's lovely D major Sonata K. 311 and Beethoven's early Sonata Op. 2, No. 2, which he dedicated to his teacher Haydn.

Rafal has played these sonatas many times in concert and counts them among the works that have shaped his playing.

By juxtaposing the different styles of these three great composers, Rafal displays his stylistic security and balance, both of which have been widely acclaimed in recent concert reviews.