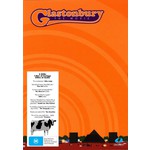 If you were there you're in it. If you weren't you'll wish you were once you've witnessed this remarkable DVD box set.

Based around the critically acclaimed feature film shot at what is commonly regarded as the last of the great old-school Glastonbury's. At the time of filming, mindful of emerging multimedia technologies, the creators didn't just set out to make your average feature film. They made sure they got everything.

Now, spanned across three full-capacity discs they have finally finished what they set out to do 14 years ago. On disc 2 there's even a way of playing it so that it runs for 38 hours. They shot the lot: some of the best bands of the early 90s, entire gigs, interviews, backstage, but most importantly the comings and goings of all the people who make Glastonbury what it is. It's not just a music festival. It's a way of life.

Why did Mike Leigh call the film a masterpiece? Because he got it. He realised that it had managed to capture a very real human experience on celluloid. Glastonbury The Movie was released in UK cinemas on summer Solstice 1996. It's since gone global showing in every continent, even Antarctica. In a world where everybody has sold-out, come and see what life was like in that bygone era before Oasis, before Blair, before on site cash-point machines and mobile-masts. Come and see the film that was too real to be accepted by the establishment. The film by festival fans for festival fans.

"This remarkable film evokes the chaos and wonderment of the event like the slow unfolding of a bizarre and rarely sighted example of fauna... underlines a real spirituality." - Melody Maker

"Marvellously honest, beautifully shot. The most impressive festival movie this reviewer has seen in ages." - Time Out

"Not since Woodstock has a feature film so vividly captured the spirit and energy of a generation." -Seattle International Film Festival.

12 hours of video / 24 hours of audio. THE COMPLETE EXPERIENCE.