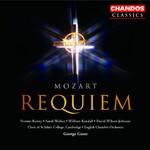 'George Guests new recording is distinguished by its deliberate tempos but also its very powerful rhythmic momentum and an expressive intensity of a kind one might not expect from a conductor and choir who belong to the English cathedral tradition. The choir is first class.'
Gramophone

The recording features distinguished soloists and one of England's most respected church choirs under the baton of the late George Guest.

Few works have been surrounded by the mystery and speculation which attends the Requiem. Set in Mozart's personal 'tragic' key of D minor and written to a commission received at a time of desperation - when his health was precarious and his finances more so - it became his own musical epitaph.

Music lovers and readers the world over are familiar with the haunting account of the commissioning of Mozart's Requiem in Otto Jahn's biography: 'A stranger, tall, thin, gravelooking, dressed from head to foot in grey… presented Mozart with an anonymous letter begging him to name his price for the composition of a Requiem…' Mozart became convinced that the spectral caller was an emissary from the afterlife come to summon him away.

With a start like that, and the turn of events which followed, it is hardly surprising that the piece soon became entangled in a web of romance: suggestions that it was bound up with a plot against Mozart's life still refuse to lie down. The story of the mysterious grey-clad stranger, though unforgettable, is based on a letter since exposed as a forgery. Nevertheless, while the now generally accepted truth of the matter is less sinister, it is hardly less bizarre: there was a certain Count Franz von Walsegg who was in the habit of commissioning works from established composers, then having them performed in his castle for his audience to guess the composers.

Mozart died before he could finish his Requiem. Faced with financial ruination, his widow, Constanze, sought desperately to have the work completed by someone else. The job fell to Franz Xaver Süssmayr, a pupil and friend with whom Mozart had discussed the progress of the Requiem in his final days and who had the ability to duplicate Mozart's handwriting. The task that faced him was enormous: of the work's eleven movements, only the Introit and Kyrie are mostly Mozart. Of the next eight sections the orchestration is mostly Süssmayr's, following a few sparse indications of scoring in the composer's sketches. Süssmayr's remarkable salvage job was duly delivered to the Count in 1793.

Reviews:
'George Guests new recording is distinguished by its deliberate tempos but also its very powerful rhythmic momentum and an expressive intensity of a kind one might not expect from a conductor and choir who belong to the English cathedral tradition. The choir is first class… Throughout the choral singing has a rare strength and vigour. I was very much struck by the clarity and balance of the recording…'
Gramophone

"St John's Choristers are especially sweet and emotive, and his men aren't as hooty-sounding as some. The boys' pure and floating top end made for many a spinal tingle. The soloists are excellent - particularly Yvonne Kenny - and the English Chamber Orchestra plays beautifully, as usual."
American Record Review