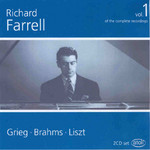 "I'm afraid that there are not enough adjectives in the language to fully describe the feeling of well-being and euphoria in Farrell's music making which I believe to be peerless. The composers on these discs are all of the Romantic era, from Chopin to Rachmaninov. The sensitivity and clarity of his playing is immediately engaging, with the listener (this one) hanging on every note. He had a measure of personal touch which was always at the service of the composer, now delivering to the listener of these recordings music-making of the very highest order. Richard Farrell brings new excitement and insights to familiar repertoire making listening an experience of rewarding re-discovery."
(TheWholenote.com)

Over Fifty years ago on a country road near Arundel, Sussex, a car unaccountably left the road and hit a tree, killing all three of the vehicle's occupants. One of the passengers in the car was Richard Farrell. Richard was just starting an amazing career as a concert pianist.

In 1956 he made what was to be his last tour of New Zealand. By this time he was tackling some of the mountain-peaks of the pianistic repertoire in his programmes - things like the Brahms F Minor Sonata and the "Handel" Variations, Ravel's "Gaspard de la Nuit", Chopin's Op.10 Etudes, and some Liszt transcriptions and paraphrases. As well, with the New Zealand National Orchestra, whose work with conductor James Robertson he praised, he played the "Emperor", and the Ravel Left-Hand Concerto.

That same year Farrell had commenced what seemed a highly promising recording career in England with Pye Records, beginning with a coupling of the Grieg and Liszt E-flat concertos in which he was partnered by the Halle Orchestra under George Weldon. These two concertos are on this recording.

Liszt:
Piano Concerto No.1 in E-fl at S.124 (stereo)
The Halle Orchestra, conducted by George Weldon
Previously released in mono on Pye cat no CCL 30104

View a biography on Richard Farrell