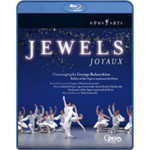 "A gem of dazzling brilliance" (The Independent)

George Balanchine and the Paris Opéra always enjoyed a special relationship after Jacques Rouché, the then administrator, offered the young choreographer the post of ballet master in 1929. Balanchine declined the job, but he created several ballets for the company and came to the Palais Garnier regularly to oversee his works. In 2000, seventeen years after his death, a rare and precious ballet arrived at the Paris Opéra: Jewels, a work first performed by the New York City Ballet in 1967. This alluring, abstract ballet, a triptych in which each piece sparkles with the brilliance of a precious stone, is a lyric tribute to women and to the capital cities of the great dance schools. Couturier, painter and craftsman Christian Lacroix created the glorious costumes and sets which, together with the outstanding performances of the dancers and the sensitive musical direction of Paul Connelly, results in a celebration of sumptuous splendour.

"A gem of dazzling brilliance." (The Independent)

"It is open to doubt whether even Balanchine has ever created a work in which the inspiration was so sustained, the invention so imaginative, or the concept so magnificent." (The New York Times)

"For Rubies nothing but delight. Aurélie Dupont, Marie-Agnes Gillot, Alessio Carbonne were electric, super charged, at the head of a fizzing cast, hard edged, hard driven, hard to beat." (The Financial Times)

"It is crammed with invention and incredible difficulty." (Le Monde)