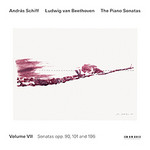 The simultaneous yet separate release of the last two volumes of Schiff's complete Beethoven sonatas in autumn 2008 finally offers the opportunity to oversee the pianist's approach to this unique repertoire segment in total. Part VII, recorded once again live at Tonhalle Zurich, includes the first three of the so-called "late" sonatas which were written between 1814 and 1822. A highlight in any Beethoven cycle is the 45-minute long "Hammerklavier" sonata which Schiff - especially with regard to the fast tempo markings by Beethoven - calls "probably the hardest work in the whole repertoire of the piano - technically, structurally, atmospherically, metaphysically." Reviewers in England, Germany and Switzerland expressed their unanimous admiration after Schiff's recitals with this programme in May 2006, praising the pianist's structural awareness, his individual approach to musical characters, and outstanding sonic control.