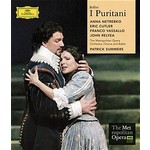 This Blu-Ray disc is based on the I Puritani revival in January 2007; Anna Netrebko's partners are the young American tenor Eric Cutler in the role of Arturo, the fine young Canadian bass-baritone John Relyea and the Italian baritone Franco Vassallo as Riccardo

The performance was transmitted live in high definition to movie theatres in the US, Canada and Europe, and broadcasted live on Metropolitan Opera Radio, on Sirius Satellite radio channel 85

Bellini's "bel canto" opera - his last (first performed in 1835) - is enchantingly crazy in plot, superb in musical dramaturgy, and one of the marvels of 19th-century musical theatre

"Looking as graceful as a gazelle and singing as sweetly as a bell struck with a surprising outburst of coloratura, Anna Netrebko sang in I Puritani for the first time at the MET" (The New York Post)

"Anna Netrebko proved herself a master of extreme opera, that volatile mixture of emotional distress and consummate technique. That's what we need divas for" (Newsday NY)