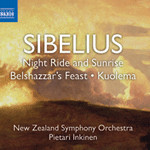 "This is one terrific disc! Pietari Inkinen is a Sibelian of the first order. The young conductor has the New Zealand Symphony playing its collective hearts out for him and the recorded sound is superb." Bargain of the Month MusicWeb April 2009

"Pietari Inkinen is one of the most remarkably gifted conductors of a generation, this new release numbered among the great Sibelius recordings. The detail and subtle colours he brings to Night ride and sunrise is magical; his Belshazzar is full of atmosphere, and you listen with refreshed ears to the familiar Valse Triste which opens Kuolema. His New Zealand Symphony, already in the orchestral premier league, respond with superb playing in a magnificent disc. A "must buy" release."
--Review by David Denton, Yorkshire Post

"This is one terrific disc! On the basis of this alone..Pietari Inkinen is a Sibelian of the first order. The young conductor, born in 1980, has the New Zealand Symphony playing its collective hearts out for him and the recorded sound is superb." Bargain of the Month MusicWeb April 2009

"A nice collection which looks to me as if it might - with a previous Inkinen NZSO disc - form part of a complete cycle of the non-symphonic Sibelius. If so it will complement Naxos's Iceland Symphony intégrale."
(MusicWeb Jan 2009)

While the beloved Valse triste and Scene with Cranes from Kuolema are virtually signature tunes for the great Finnish composer, much of Sibelius' orchestral and theatrical music remains undeservedly less familiar. From the incidental music for the play Belshazzar's Feast Sibelius drew four richly scored orientalist movements. The tone poems Pan and Echo and Night Ride and Sunrise respectively evoke the world of ancient myth and a nocturnal journey towards a Nordic dawn. A lilting waltz dances at the heart of the impressionistic The Dryad, while castanets enliven the light-hearted mood of the Tanz-Intermezzo, Op. 45 No. 2.