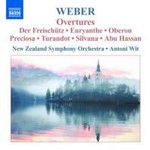 "Weber was a great tunesmith, and some of his overtures were on the same level of popularity (in the time before pervasive aural garbage) with William Tell, 1812 and the like. Polish-born and trained conductor Wit I'm sure is familiar with the tradition and style, but acquiring a 'foreign' accent in playing is not easy. The NZS players somehow do not convey the zest, lilt and swagger of these old and very central-European warhorses."
-- The New Recordings

"It is good to have a new collection of Weber overtures, especially at budget price, when such collections are less common than those of, say, Rossini. If not as brilliant as those, they are scarcely less worthy of exposure in their considerable variety. I am happy to welcome this collection."
(MusicWeb March 2009)

Carl Maria von Weber composed a number of pioneering works for the operatic stage as well as incidental music whose highly attractive scores combine Classical principles of clarity with a unique lyricism and orchestral mastery that would inspire later Romantic composers.

This disc presents overtures from his ever-popular Der Freischütz, Euryanthe and Oberon, as well as from other undeservedly lesser-known operatic works, alongside concert pieces such as the Jubel-Ouvertüre and Der Beherrscher der Geister, and the incidental music for the plays Preciosa and Turandot, all of which amply display his vivid and refined dramatic imagination.

In a recent concert the Dominion Post praised the "superb playing" of the NZSO.