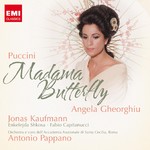 "Gheorghiu somehow conveys not only the depth of Butterfly's love but also her inner knowledge that, in fact, her belief in Pinkerton's devotion is hopeless. This is a mature interpretation which suggests strength above all, so that the touches of vulnerability are added with subtlety. ...Jonas Kaufmann is an ardent Pinkerton... Enkelejda Shkosa is a vivid Suzuki and Fabio Capitanucci the sympathetic Sharpless. ...Antonio Pappano takes a less driven and melodramatic way with the score than Karajan in his three recordings; it's nearer in mood to Barbirolli... though there is no lack of passion at the great climaxes - just listen to the spine-tingling moment of the sighting of the ship." (Gramophone)

"You can't fault her diligence, nor the rest of the cast's dramatic flair. Jonas Kaufmann's husky Pinkerton is excellent; if he skimps on ardour, that's because Butterfly's fake husband is more in lust than love. Enkelejda Shkosa contributes a moving Suzuki; Fabio Capitanucci a more spontaneous and less censorious Sharpless than usual. But Pappano is the icing on the cake." (The Times)

"In many respects Gheorghiu's singing reminds me of Callas's: in Act I they both adopt a 'little girl' voice, and in Act II they both sound more mature… so that by the tragic climax they present a strong personality in full possession of her destiny. This is Gheorghiu's greatest achievement on disc. Jonas Kaufmann as the winning, faithless Pinkerton is on tremendous form, too..." (BBC Music)

"a resounding success. Pappano's natural feeling for the phrasing and dynamic shading of Puccini's great melodies is here enhanced by having an Italian chorus and orchestra...Un bel di has rarely been so richly or securely sung in a complete Butterfly...[Kaufmann] seems totally comfortable in the Italian text and, like Gheorghiu, brings out many detailed subtleties...an excellent choice in a very competitive field." (Penguin Guide)