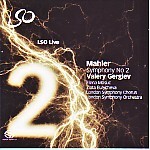 "This really is a very appealing performance, and even in a crowded field I can easily imagine it giving Mahlerians a good deal of pleasure."
(ClassicsToday 9/9)

"Mahler's Second Symphony is so colorful and so well stage-managed that it's possible to find great performances by conductors who aren't specialists in this repertoire. For better or worse, Mahler has become "common coin". Such is the case with Levi's performance listed above: it's so well played and recorded that it disarms criticism, though listeners who regard "authentic" Mahler as more heavily inflected when it comes to issues such as tempo and phrasing may never be won over. Similarly, this is a very exciting new recording from Valery Gergiev and the LSO, an orchestra that already has done well by this symphony under both Bernstein (Sony) and Solti (Decca). Some listeners might find it a touch undercharacterized, but I don't think so.

Gergiev's emphasis on keeping things moving by no means results in a lack of atmosphere. The first-movement coda, for example, is one of the creepiest on disc thanks to the menacing presence of the soft percussion. His Andante flows elegantly, and never stiffly. The scherzo contains one of two significant miscalculations: its trio section has little Romantic charm at an excessively swift tempo, and the trumpets are insufficiently prominent. The other miscalculation concerns Gergiev's fondness for wobbly-voiced Slavic singers, particularly mezzo-soprano Zlata Bulycheva, whose German pronunciation is strange and whose tone is singularly unappealing. So, for that matter, is Elena Mosuc's fragile soprano.

On the plus side, Gergiev's relatively swift tempo for the choral episodes gives the second half of the finale an extra fluidity and coherence, even as it slights some the music's moments of "mystical" stillness. The very grand final pages have tremendous impact, with the bells and tam-tams particularly well captured, even if the organ is less prominent in the mix than it might be. Despite the caveats mentioned above, this really is a very appealing performance, and even in a crowded field I can easily imagine it giving Mahlerians a good deal of pleasure."
(ClassicsToday 9/9)