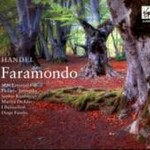 "The cast is notable for the flamboyant contributions of the impressive young countertenors Max Emanuel Cencic and Philippe Jaroussky. Strongly recommend to diehard Handel fans." The Telegraph

"Composed towards the end of Handel's long operatic career, Faramondo has enjoyed few modern revivals - a neglect which the Handel scholar Jonathan Keates ascribes to the weakness of its tortuous libretto and pallid characterisation rather than any musical shortcomings. This lively and attractive recording certainly reveals an invigorating score, swiftly paced with a wealth of incisive, tuneful arias and a welcome absence of dry recitative. The cast is notable for the flamboyant contributions of the impressive young countertenors Max Emanuel Cencic (in the title role) and Philippe Jaroussky. Strongly recommend to diehard Handel fans." The Telegraph, 18th February 2009

"…overall a decent account is given of this worthwhile rarity." BBC Music Magazine, May 2009 ***

"Philippe Jaroussky and Max Emanuel Cencic each give attractive performances of virtuoso arias. Marina de Liso gives a stunning performance of Rosimonda's turbulent "Si, l'intendesti, sì" (in which Diego Fasolis brings out exciting details in the accompaniment), and the bass villain Gustavo is resonantly sung by In-Sung Sim. Fasolis's direction is exemplary for its warmly authoritative expressiveness and fluent mastery over detail. Faramondo is revealed as a much better score than I had previously realised." Gramophone Magazine, July 2009

"A cool, brilliant operatic game, it's devastatingly realised by Diego Fasolis and I Barocchisti in a recording that for many will seem like countertenor heaven. Most people will probably want to hear it for either Max Emanual Cencic in the title role or Philippe Jaroussky's Adolfo. The star turns, however, come from Xavier Sabata's chameleon-like Gernando and from Marina de Liso as firebrand Rosimonda and Sophie Karthäuser as the irritatingly virtuous Clotilde. The whole thing is a revelation." The Guardian, 10th April 2009 *****

This production of Faramondo is probably unique in recording history - and maybe also in the performing history of Handel's operas since the 18th century. It finally gives us a complete recording of a Handel opera with men singing all the male characters cast for singers with high voices.