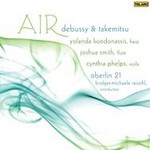 MARBECKS STAFF PICK: CD OF THE YEAR 2009
Hailed by The New York Times for her "powerful playing and musicianly energy," Yolanda Kondonassis celebrates her fourteenth recording on the Telarc label

Hailed by The New York Times for her "powerful playing and musicianly energy," Yolanda Kondonassis celebrates her fourteenth recording on the Telarc label. One of the world's foremost harpists, Yolanda has appeared all over the world as a concerto soloist, recitalist, and chamber musician. On this album, she is joined by friends and colleagues, flutist Joshua Smith, violist Cynthia Phelps, and the string orchestra, Oberlin 21 led by Bridget-Michaele Reischl.

"In selecting the music to include on this album, we were drawn to the luminous color and atmosphere that is so magical in these parallel works by Debussy and Takemitsu," says Kondonassis. The repertoire on this recording highlights Debussy's genius as well as his enduring inspiration and influence on Toru Takemitsu, who once said, that while he was technically self-taught, he considered his greatest teacher to be the music of Claude Debussy. In the liner notes, Richard Rodda writes, "Takemitsu, like Debussy, sought to transmute dreams, water, gardens, sky, birds, and the quiverings of the human heart into patterns of sounds and silence that would penetrate to the quiet, inner place where the spirit dwells."

In 1904, Debussy was commissioned by the instrument-making firm of Pleyel to create a work to showcase their new chromatic harp. The commission was to serve both as a test piece for students at the Brussels Conservatory and as a demonstration of their harp's potential to prospective buyers. The result was a matched pair of dances, one "sacred" and one "profane," for chromatic harp and string orchestra called Danses sacrée et profane for Harp and String Orchestra. It should be noted that the standard harp used today is not Pleyel's designer Lyon's chromatic harp but rather Erard's double-action pedal harp.

Takemitsu's And Then I Knew 'Twas Wind title is derived from a line of poetry by Emily Dickinson: "Like rain it sounded till it curved / And then I knew 'twas wind / It walked as wet as any wave / But swept as dry as sand." Takemitsu wrote that the work, composed in 1992, "has as its subject the signs of the wind in the natural world and of the soul, or unconscious mind (or we could even call it 'dream'), which continues to blow, like the wind, invisibly, through human consciousness."

This environmental theme continues through Takemitsu's other works on this album. Toward the Sea II is a short piece of pastoral music with three key notes taken from the word 'SEA' (E-flat [i.e., 'Es,' the conventional German designation for the pitch E-flat], E-natural, A-natural)." The titles of the work's three movements - The Night, Moby Dick and Cape Cod - imply programmatic associations, but the music, except for a slight animation in the second and third sections, is vague and equivocal, "more an expression of feeling than a painting," as Beethoven said of his "Pastoral" Symphony. If Toward the Sea is indeed an evocation of the New England shore, then it is not the New England of granite boulders and glinting sunlight and billowing sails running fast before the wind, but of first light and creeping mists and indistinct horizons, of undulant reflections in a tide pool, of distant buoy bells muffled by fog. The two solo flute pieces, one by each composer, are interspersed within the program. Takamitsu's Air is an introspective and unhurried piece. That lends its name to the title of the album. It is reminiscent of the French Impressionism heard in Debussy's Syrinx, about a nymph who was transformed into a reed to save her from the lusty pursuits of Pan, who then plucks that very reed and plays a song of longing for his loss of Syrinx.

Closing out the program is Debussy's Sonata for Flute, Viola, and Harp is one of most uncompromisingly modern creations, about which the composer himself expressed some uncertainty regarding its emotional effect: "[The music is] so terribly melancholy," he wrote to his friend the Swiss journalist Robert Godet, "that I can't say whether one should laugh or cry. Perhaps both at the same time?" Perhaps the colon cancer that would end Debussy's life three years later was already playing its part on his compositions. Joshua Smith, known for his "gorgeous sound, bracing virtuosity, and breathtaking lyricism," enjoys a multi-faceted career as a leading soloist, recitalist, chamber musician, teacher, and clinician as well as his role as Principal Flutist of The Cleveland Orchestra, Joshua played on Yolanda's first release for Telarc, Scintillation (CD 80361). Making her Telarc debut, violist Cynthia Phelps enjoys a versatile career as an established chamber musician, solo artist, and Principal Violist of the New York Philharmonic, a position to which she was appointed in 1992. Founded in 2008, Oberlin 21 is an exceptional group of young artists from the Oberlin Conservatory of Music, led by Oberlin's Director of Ensemble Programs and Music Director of the Green Bay Symphony Orchestra, Bridget-Michaele Reischl.