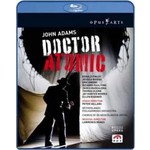 'The cast is flawless… Adams has created a beautiful provocative work that refreshes the repertoire.' The Times

The longing to overcome human boundaries led the physicist J. Robert Oppenheimer to begin an experiment that formed a threat to the whole of humanity, and whose scientific results still do today. The question of the moral implications of the atomic bomb is raised in John Adams' opera, just as much as that of the influence on the private lives of the main characters. Doctor Atomic is the fifth work to result from almost twenty years of collaboration between the American composer and his fellow American director and Erasmus Prize-winner Peter Sellars.

'The cast is flawless… Adams has created a beautiful provocative work that refreshes the repertoire.' The Times

"Doctor Atomic centres on the hours before the first detonation of the atomic bomb… Peter Sellars's film of the opera is expressionistic, claustrophobic, sometimes deliberately out of focus. The sound quality is exceptionally good, as is the singing and playing under conductor Lawrence Renes." (BBC Music Five Stars)

"Gerald Finley carries the problems of the world on his shoulders as Oppenheimer and the Netherlands Philharmonic and Lawrence Renes play like it's the best score since Fidelio." (Gramophone)