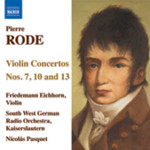 A student of Viotti, Pierre Rode was an eminent violinist active in early 19th century Paris who helped found the influential French violin school. Respected by Beethoven, Mendelssohn and Spohr, among others, Rode is mostly known for his 24 Caprices for Solo Violin, yet his 13 Violin Concertos are rarely if ever played. Friedemann Eichhorn, the soloist on this world première recording, has commented: "Working with these scores was a wonderful adventure... Rode uses sophisticated and often rich orchestration... As a counterpoint to effective virtuoso violin writing, Rode emphasizes the singing quality of his instrument". The Violin Concerto No. 7 , the best known of the Concertos, was a favourite of Wieniawski, and one of the very few works (besides his own) that Paganini consented to play.

"Mr. Eichhorn plays with a sweet and airy tone… There is ample technical display to support Rode's reputation as a virtuoso, and Eichhorn carries off florid passages with ease." MusicWeb