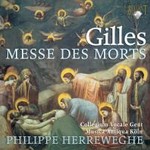 'This is in short a performance with the carefully moulded contours, sensitively judged sonic qualities and sheer spiritual presence that we have come to recognize over the years as true Herreweghe characteristics.' Gramophone

"At bargain price this is a fine catch. I would recommend it to you even if baroque music is not always your bag."
(MusicWeb April 2010)

Jean Gilles, born in Avignon in 1668, enrolled in the cathedral school in Aix-en-Provence. Under the tutelage of Guillaume Poitevin, who nurtured his unmistakable talents, he was introduced to the composer André Campra, eight years his senior. It is Campra who would play such an important part in the survival of his younger colleague's Requiem by taking it to Paris and performing at the Concert Spirituel.

In 1697, Gilles was appointed as master of music at the cathedral of Toulouse and seemed set for a successful career. Tragically, though, the ill health which had dogged him since childhood claimed him at the age of 37 in 1705. It seems that his Requiem was given its premiere at his own funeral.

After Campra's championing of Gilles and in particular his Requiem, it was performed at the memorial service for Rameau in 1764, and for Louis XV ten years later. Far from being a dark, terrifying Requiem in the style of Mozart, Berlioz and Verdi, it is an almost jaunty work - more a celebration of the life of the deceased. Where there is a connection to Verdi's setting of nearly 200 years later is the operatic nature of the music - and the influence of the dance, theatre and above all the tragédies lyriques of Lully are never far away. It is 'theatre of sorrow', to adapt the 18th-century phrase 'Castrum doloris' - fortress of sorrow - to describe the elaborate catafalques erected for the funeral services of high-ranking figures.

• 'This is in short a performance with the carefully moulded contours, sensitively judged sonic qualities and sheer spiritual presence that we have come to recognize over the years as true Herreweghe characteristics.' Gramophone